Although it is  one of the smallest eagles, the lesser spotted eagle is a majestic bird that can usually be observed calmly soaring above fields and plains. It reaches maturity around age of 3-4, and can live up to 20 years. Life of lesser spotted eagle is closely linked with humans and their activities as it is strongly affected by the way we manage our farmlands and meadows, and what we do in the forests. Lesser spotted eagle needs a mosaic of different land uses - a meadow, fallow lands and grasslands where to forage for food, and it needs a forest where to build a nest. It also needs separately growing trees, hay stacks, fences and poles where to sit and  observe the potential prey.

Most often the lesser spotted eagle feeds on small rodents (mainly voles) and amphibians, but can prey as well on moles, insects, and - rarely - small birds.
Lesser spotted eagle forages in meadows, grasslands, fallow lands, and does it for the most of its active daytime. Most often it will forage in the range of one kilometer around the nest, therefore it is especially important that this area includes mowed meadows and small wetlands as a source of frogs. Lesser spotted eagle looks for the prey while soaring in the air or sitting in an elevated location - a separately growing tree or haystack, but it can also be seen foraging on the ground.

They make their nests in grown leaf and mixed forests with spruces, birches and aspens, and usually build the nests in close proximity to the edge of forest.

Lesser spotted eagles return to Latvia from Africa in the beginning of April. At the end of April the female lays one or two eggs - white with darker spots. After a little more than a month the chicks are hatched. If both eggs hatch and chicks are two, the oldest and strongest attacks the other and in most cases only one survives. Lesser spotted eagles are very sensitive to disturbances therefore they should not be disturbed during breeding, especially time of incubation. 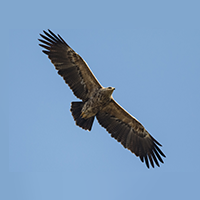 Medium sized, the wingspan around 150 cm 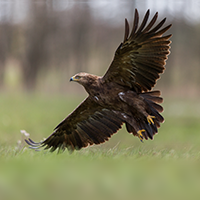 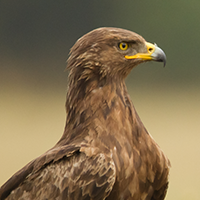 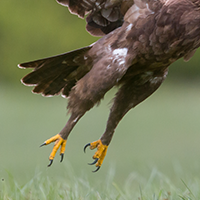 Legs covered in feathers up to fingers

Why it is important to protect Lesser spotted eagle

In Europe Lesser spotted eagle is threatened by habitat loss (deforestation, industrial farming practices ) and hunting on the migration routes.

No other country in EU is a home to so many lesser spotted eagles. If the population decreases in Latvia, it will affect the global population, thus we bear a responsibility to protect the species.

The population of lesser spotted eagles in Latvia has decreased by 10-15% since 2000.

Lesser spotted eagle is an indicator species that serves as a measure of the environmental conditions in given area.

Lesser spotted eagles are breeding mostly in mature forests, as younger trees are not stable enough to carry the weight of the nests. Therefore it is important to preserve the old growth forests.

Lesser spotted eagle is affected by intensive farming and intensive forestry that decreases the habitats suitable for the species.

If the farming and forestry is lesser spotted eagle friendly, it is beneficial also for other plant and animal species and biological diversity in general.

Latvia is an important region for research of lesser spotted eagle - we provide valuable and globally significant information about the species.

Latvia can be proud of lesser spotted eagle - we are a good place for this special and beautiful bird.

What is the life of lesser spotted eagle like? What does it eat? How does it behave while nesting? Webcams are a tool that allows to follow the life of birds very closely. The obtained information can be useful for researchers in order to understand better the behaviour and habit of birds.

Therefore we have installed two webcams at lesser spotted eagle nests in Latvia. The first broadcasting season was in 2018.

One camera is located in a spruce in Zemgale region. In this nest a young bird was observed in summer of 2018. The construction of the nest allows to asume that this nesting place has been used by lesser spotted eagles already for some time.

The other nest that is broadcasted by webcam is location in birch tree in Zemgale region. The nest is known since July 2017 when there was observed one young bird. It is located in a birch tree approximately 20 meters from ground. The nest could be at least 5 years old.

In 2018 the nesting did not happen. In the spruce nest the eagle was observed several times, the birch nest was more often inhibited – several birds were observed there during spring, later a pair of eagles spent there some more time and even decorated the nest with spruce and pine needles. The pair was observed in the nest up until August.

In 2019 the broadcasting was resumed in March.